Billions of dollars in Federal grants are awarded each year for programs and projects that benefit the public. This assistance is rooted in the Constitution and its call to "promote the general Welfare."

It wasn't until the 1970's, however, that Federal grant policy began to evolve into what it is today. In the 70's, Congressional lawmakers responded to reports that Federal agencies were using assistance awards, or grants, to pay for services. In doing so, they could side-step competition and procurement rules normally associated with government contracting.

To help with the implementation of the law, the Office of Management and Budget (OMB) published guidance in 1978 directing agencies to ensure that grants funds be used only for assistance-based programs and projects.

Since the 1970's, subsequent grant-related legislation has helped to further develop Federal grant policy. It works much like it did in 1977 and 1978: Congress creates the grant-related laws and regulations.

The Executive Office of the President – of which OMB is part – helps to implement the laws through Executive Orders and Guidance that define administrative rules.

Finally, the grant-making agencies create internal and external policies and procedures based on the OMB guidance. (See chart.) These agency-specific policies for award recipients do not carry the weight of law, though they may be required of award recipients if they are listed in the Notice of Award.

How Grant Policies Are Made

When a new law is added to the books, that is only the beginning.

Other legislation has addressed everything from lobbying efforts to auditing requirements, to reporting procedures, to transparency and cross-agency data-sharing.

The OMB – along with other bodies – has continued to play an important role in interpreting and implementing the laws among the Federal government's awarding agencies. Today's current grant policies have been largely shaped by a range of statutes, regulations, Executive Orders and guidance.

To learn more about current grant policies, click below for summaries of the laws and their intended impact, beginning with the most recent:


Review the Uniform Guidance page or check out the CFO training resources for the latest grants guidance.


Read about news and updates to federal grant policy on the Grants.gov Community Blog. 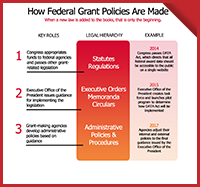